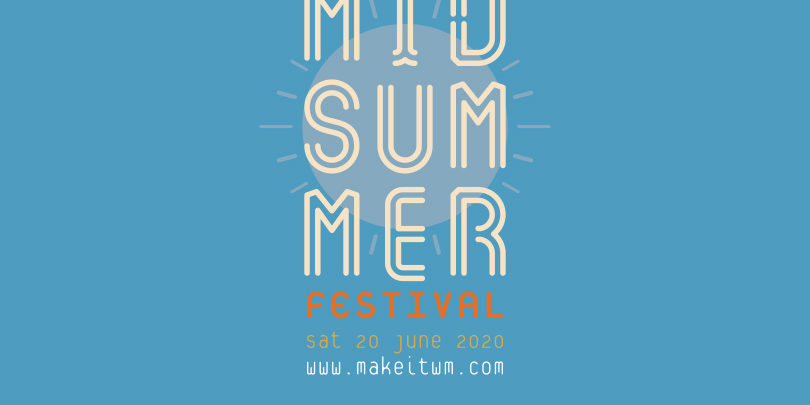 Featuring a collection of many West Midlands theatre, dance, music, artists and venues Midsummer Festival will mark the Summer Solstice with a wide range of live, archived and pre-recorded cultural activity available online including performances which have never been seen before from companies including the Royal Shakespeare Company, ACE Dance and Music and Birmingham Contemporary Music Group.

Midsummer Festival is the first event organised by the WMCRU, which has been created to co-ordinate, develop and deliver an action-orientated, response by over 100 arts organisations in the West Midlands to the Covid-19 crisis in the short, medium and long term. Led by Culture Central, WMCRU’s purpose is to ensure the visibility, viability and recovery of the Cultural Sector in the West Midlands.

Inspired by annual Midsummer celebrations across the region, the day will feature work influenced by Shakespeare’s A Midsummer Night’s Dream and will respond more generally to nature with open air events in a wide variety of settings across the region and will include a live performance of short excerpts at Compton Verney, which was the setting for the 1968 film adaptation starring Dames Judi Dench and Helen Mirren.

Performances will be streamed online throughout the day with work including WILD, a daring dance-circus production from Motionhouse; a series of Rural Recordings from Pentabus Theatre including Here I Belong by Matt Hartley and Crossings by Deirdre Kinahan; and Rosie Kay’s CITY – BREATH – WATER, a poem of dance responding to the beauty and harshness of the city of Birmingham. Award winning dance and music company Sonia Sabri Company will also be showcasing some of the best highlights of their dance and music performances, as well as a rare opportunity to be part of a live conversation with their internationally renowned artistic and music directors, Sonia Sabri and Sarvar Sabri.

Ex Cathedra will present a selection of summer-themed music, from a birdsong-inspired commission to summer favourites, inviting festival goers to don their best holiday wear and sing along at home as they take a musical Summer Holiday, somewhere beyond the sea…Designers from the Royal Shakespeare Company will provide a workshop on how to create your own fairy bower at home inspired by the wonderous woodland bed of Titania, queen of the fairies. The day will end in celebration at the Midsummer Vogue Closing Party hosted by DanceXchange Vogue Tutor Jason Andrew Guest who will inspire audiences to strike a pose in a 15-minute tutorial followed by a 30-minute DJ set and dance party.

As well as the Summer Solstice, the festival programme will also take inspiration from Refugee Week (15th – 21st June), with Midsummer Festival taking place on World Refugee Day 2020. Refugee Week is the UK’s largest festival celebrating the contribution of refugees and promoting understanding of why people seek sanctuary. Highlights include a dance tribute to Ira Aldridge celebrating his life and achievements as an African-American actor in the UK from Ace Dance and Music; Ikon Gallery and Celebrating Sanctuary Birmingham will present Soapbox, 20 quick-fire, home-produced, soapbox videos based on the week’s theme of Imagine; and digital film screenings of refugee stories from Birmingham Opera Company.

Director of Culture Central Erica Love said: “Covid-19 has decimated the cultural sector. It is more important than ever for the West Midlands to come together and support each other. The WMCRU believe that as a region we should respond to this unprecedented threat in a typically generous, loud and collaborative manner, which is exactly the spirit of Midsummer Festival.

The festival is the first collaboration of its kind for the region, building on the many digital opportunities we’ve seen from our arts and culture organisations to bring their work online during lockdown, as well as the outpouring of creativity from households and online communities. It’s set to be a great event and we look forward to welcoming audiences through our virtual doors.”

Andy Street, Mayor of the West Midlands said: “Arts and culture organisations are at the heart of our communities throughout the West Midlands, with the tourism, hospitality and cultural sector supporting more than 135,000 jobs in the region and contributing around £12.6bn a year to the local economy.

At such a critical time for the sector it’s more important than ever that we proudly come together to show what our region has to offer, and the Midsummer Festival will do exactly that”